Warning: Use of undefined constant REQUEST_URI - assumed 'REQUEST_URI' (this will throw an Error in a future version of PHP) in /home/themeclu/public_html/blog/wp-content/themes/goodlife-wp/functions.php on line 73
 10 Basic Interaction Design Principles to Boost the UX Design - Themeclues

Interaction Design, also known as Interactive Design (IxD), is the field to design the behavior of human-computer systems. As an interaction designer, we have to create the content and functions of products that are useful, easy to use, user-friendly, technically feasible, and of commercial interest. All of these are meant to improve the user experience. This article is going to talk about 10 basic principles of interaction design. Whether it is for the traditional graphical user interface or for any smart electronic devices, you can’t find it more useful.

Most of users are operating the interface just based on their instinct. In short, when they encounter a button, they will think this button will be triggered to meet their needs. But if this button get triggered in some other operation ratner than user’s expectation, it must be a bad design.

The most basic principle of interaction design is to meet the user’s needs. To determine the user’s requirements is a product manager’s basic work, there are many ways and tools to help us identify the user’s needs. For examples, observing user behavior, analyzing data, building user scenarios, and more.

Consistency is a fundamental principle in the product design process. It requires that within the same or familiar functions and scenes, to use the consistent performance, operation, and feeling in a (or a category) product. The purpose of consistency is to reduce the user’s learning costs, the user’s cognitive costs, and the probability of misuse. Let me show you an example:

If I told you this is a part of the poster from a famous company, do you know which one? Ok, a little hint for you, a beverage company. That’s right, it’s Coca Cola, here is the original poster.

Why the first picture does not appear Coca-Cola’s logo, product images, product introduction and any other information, and you still can assure it is Coca-Cola? Because behind Coca-Cola, there is a system called VI (Visual Identity System) that guides all of its external image design. The essence of VI is the visual consistency through a high degree, to guide users to be forcibly associated with some kind of visual information and a business, or products.

The white streamers in the picture are actually the auxiliary graphics commonly used in the Coca-Cola VI system. The graphics appear on almost all Coca-Cola promotional materials. The colors (including the red background), the shapes, and the twisted angles are exactly the same, so when we saw the similar graphics and color, our brain will generate reactions “This is Coca-Cola,”immediately. This action drastically reduces a lot of cognitive costs.

In a certain type of product or an industry that can form a wider range of “consistent” and get everyone’s recognition. At this time, consistency will become “standard.”

Originally proposed by architect Ludwig Mies van der Rohe, it is a design philosophy that promotes simplicity and opposes over decoration. This principle has a long history and led to many different interpretations in many industries. I think “less” is not to pursue so-called “simple”, but is that we should do our best to reduce the user’s cognitive and operational costs, this is the essence of “less” in the internet industry.

In 1979, Sony found that most users had far greater demand for playing than recording, so they removed the traditional recording function of the recorder, and even removed the essential external speakers. Moreover, they put the remaining part in a small box with a stereo headset. This is the Walkman. 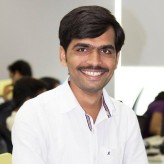 I am a Web / UI Designer and Front End Developer based in Pune, India. I am working in the Web / IT industry from last 4.5+ years. I have extensively worked on Designing and Coding various User Interfaces and Prototypes, which includes Web and Desktop based Applications, Mobile Applications, large/small scale websites.

How To Brand Yourself: Tips And Best Practices

This site uses Akismet to reduce spam. Learn how your comment data is processed.

Latest Posts
Most ViewedWEEKMONTHALLNo Stats to show
Subscribe to Blog